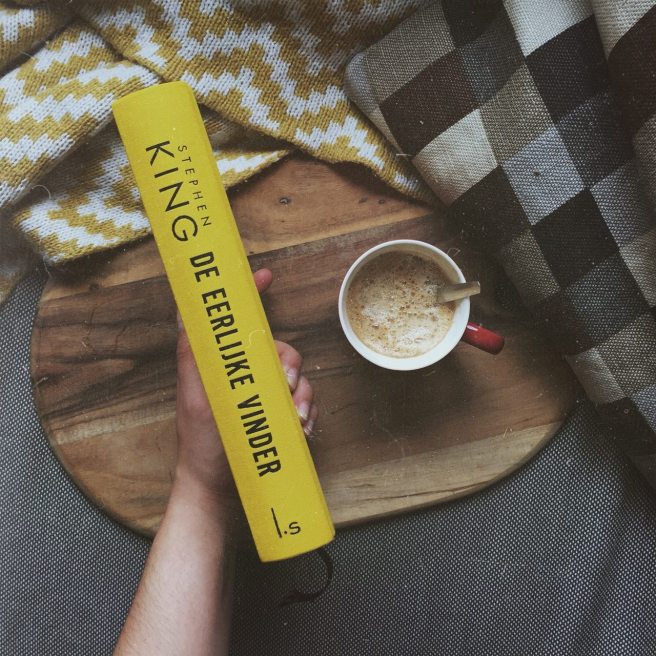 The genius is John Rothstein, an iconic author who created a famous character, Jimmy Gold, but who hasn’t published a book for decades. Morris Bellamy is livid, not just because Rothstein has stopped providing books, but because the nonconformist Jimmy Gold has sold out for a career in advertising. Morris kills Rothstein and empties his safe of cash, yes, but the real treasure is a trove of notebooks containing at least one more Gold novel.

Morris hides the money and the notebooks, and then he is locked away for another crime. Decades later, a boy named Pete Saubers finds the treasure, and now it is Pete and his family that Bill Hodges, Holly Gibney, and Jerome Robinson must rescue from the ever-more deranged and vengeful Morris when he’s released from prison after thirty-five years.
(Goodreads)

This second book in the Bill Hodges trilogy was so good, but quite different from the first book in the trilogy, Mr. Mercedes, which I absolutely loved. So it’s kind of hard to actually compare them to each other and rate them only based on that. I loved this second book, because it was yet another original story, with a sick villain (not as sick as Mr. Mercedes though), by the one and only King of horror.

The structure of the story was really good – I love how King knows how to write a novel that has you on the edge of your seat with every single page, although you know who’s the culprit right from the start! It just never bored me! Another thing that King’s really the king of is how he relates the stories to each other. Of course, Finders Keepers is related to Mr. Mercedes and King really did a good job with that. But the Bill Hodges trilogy is also related to King’s latest release: The Outsider. That’s why I’m first going to read the full Bill Hodges trilogy, before diving into the newest addition to the King universe. I heard The Outsider contains a huge spoiler for the last book of the trilogy, End of Watch, and although I’m not that big of a hater of spoilers, it’s just more fun when everything is still a surprise!

I’m so happy that King is still writing and publishing new amazing stories (for example: another one will come to you October 30th this year)! Yesterday I also started watching the tv series “Mr. Mercedes” and  I think they really did a great job with this adaptation and who they’ve cast to play Bill Hodges and Brady Hartsfield. Love ‘em. So, if you liked Mr. Mercedes, I totally recommend that you watch this series as well!