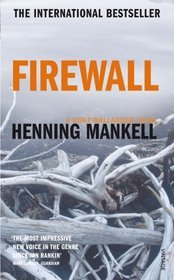 Firewall deals with two, what seem to be entirely different cases. In one a man is killed in front of a cash machine and in the other a taxi cab driver is killed by two young girls. Wallander is convinced these two must be linked to each other somehow. At the same time he faces betrayal within his own team. Will Wallander be able to fix this, while also catching one or more criminals, who always seem to know the police’s next moves?

Every now and then I love myself a slow burning Scandinavian murder mystery. I’ve always loved watching detectives on the telly, especially Scandinavian ones, and this novel by Mankell felt exactly like watching one. On the one side you’re following the solving of a murder case and on the other you’re getting involved in Wallander’s life.

The reason why I’m ‘only’ giving it 4 stars, and not 5, is because I felt like I was missing something. The story was quite the mystery, but at the same time it didn’t intrigue me as much as I thought it would. Maybe because I’m not that into computers, firewalls and everything that could go wrong with them. Maybe it’d be better if I was more interested in it though …