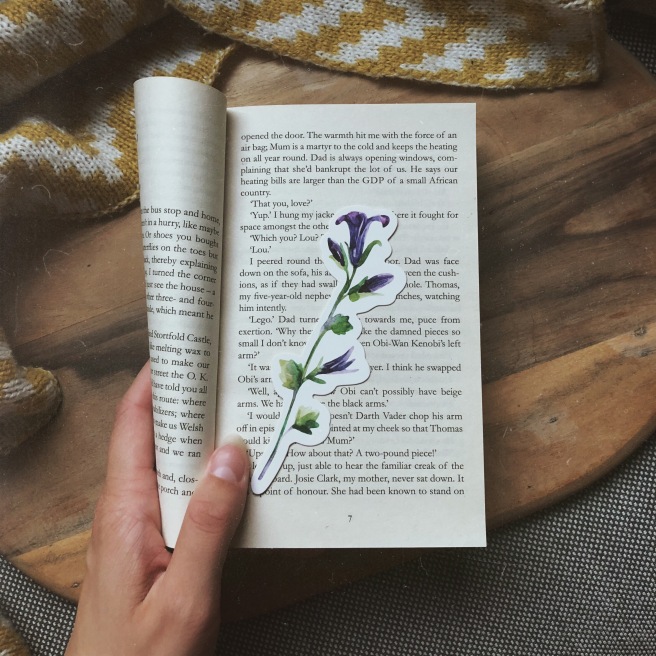 Less than two weeks left before 2018 comes to an end. Less than two! So I thought it was about time to tell you my top 5 favourite books I read in the past year. It was tough choosing only five, because I’ve read so many great books in 2018! That’s why I’m also featuring some other books that didn’t make my top five, but that I still loved reading.

“My greatest thought in living is Heathcliff. If all else perished, and he remained, I should still continue to be… Nelly, I amHeathcliff! He’s always, always in my mind: not as a pleasure… but as my own being.” Wuthering Heights is the only novel of Emily Bronte, who died a year after its publication, at the age of thirty. A brooding Yorkshire tale of a love that is stronger than death, it is also a fierce vision of metaphysical passion, in which heaven and hell, nature and society, are powerfully juxtaposed. Unique, mystical, with a timeless appeal, it has become a classic of English literature.
(Goodreads)

4. A Clockwork Orange by Anthony Burgess

A vicious fifteen-year-old droog is the central character of this 1963 classic. In Anthony Burgess’s nightmare vision of the future, where the criminals take over after dark, the story is told by the central character, Alex, who talks in a brutal invented slang that brilliantly renders his and his friends’ social pathology. A Clockwork Orange is a frightening fable about good and evil, and the meaning of human freedom. And when the state undertakes to reform Alex to “redeem” him, the novel asks, “At what cost?”
(Goodreads)

A celebrated writer’s irresistible, candid, and eloquent account of her pursuit of worldly pleasure, spiritual devotion, and what she really wanted out of life.

Around the time Elizabeth Gilbert turned thirty, she went through an early-onslaught midlife crisis. She had everything an educated, ambitious American woman was supposed to want—a husband, a house, a successful career. But instead of feeling happy and fulfilled, she was consumed with panic, grief, and confusion. She went through a divorce, a crushing depression, another failed love, and the eradication of everything she ever thought she was supposed to be.

To recover from all this, Gilbert took a radical step. In order to give herself the time and space to find out who she really was and what she really wanted, she got rid of her belongings, quit her job, and undertook a yearlong journey around the world—all alone. Eat, Pray, Love is the absorbing chronicle of that year. Her aim was to visit three places where she could examine one aspect of her own nature set against the backdrop of a culture that has traditionally done that one thing very well. In Rome, she studied the art of pleasure, learning to speak Italian and gaining the twenty-three happiest pounds of her life. India was for the art of devotion, and with the help of a native guru and a surprisingly wise cowboy from Texas, she embarked on four uninterrupted months of spiritual exploration. In Bali, she studied the art of balance between worldly enjoyment and divine transcendence. She became the pupil of an elderly medicine man and also fell in love the best way—unexpectedly.

An intensely articulate and moving memoir of self-discovery, Eat, Pray, Love is about what can happen when you claim responsibility for your own contentment and stop trying to live in imitation of society’s ideals. It is certain to touch anyone who has ever woken up to the unrelenting need for change.
(Goodreads)

2. The Eight Mountains by Paolo Cognetti

The international sensation about the friendship between two young Italian boys from different backgrounds and how their incredibly strong connection evolves, changes, and challenges them throughout their lives.

Pietro is a lonely boy living in Milan. With his parents becoming more distant each day, the only thing the family shares is their love for the Dolomites, the mountains that hug the northeastern border of Italy.

While on vacation at the foot of the mountains, Pietro meets Bruno, an adventurous, spirited local boy. Together they spend many summers exploring the mountain’s meadows and peaks and discover the similarities and differences in their lives, their backgrounds, and their futures. The two boys come to find the true meaning of friendship and camaraderie, even as their divergent paths in life— Bruno’s in the mountains, Pietro’s in cosmopolitan cities across the world—test the strength and meaning of their connection.

A modern Italian masterpiece, The Eight Mountains is a lyrical coming-of-age story about the power of male friendships and the enduring bond between fathers and sons.
(Goodreads)

Louisa Clark is an ordinary young woman living an exceedingly ordinary life—steady boyfriend, close family—who has never been farther afield than their tiny village. She takes a badly needed job working for ex-Master of the Universe Will Traynor, who is wheelchair-bound after an accident. Will has always lived a huge life—big deals, extreme sports, worldwide travel—and now he’s pretty sure he cannot live the way he is.

Will is acerbic, moody, bossy—but Lou refuses to treat him with kid gloves, and soon his happiness means more to her than she expected. When she learns that Will has shocking plans of his own, she sets out to show him that life is still worth living.

A love story for this generation, Me Before You brings to life two people who couldn’t have less in common—a heartbreakingly romantic novel that asks, What do you do when making the person you love happy also means breaking your own heart?
(Goodreads)

What’s your top five books you read in 2018? Found any new favourite authors?