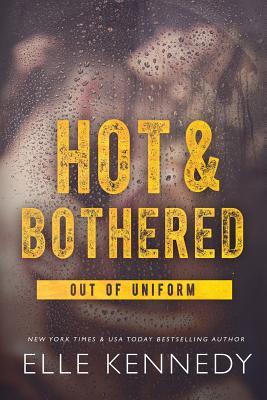 Three sizzling-hot stories from New York Times and international bestselling author Elle Kennedy!
Give a SEAL an inch, and he’ll take your heart.

Heat of the Moment
For almost a year Shelby has lusted over swoon-worthy Garrett, but she can’t figure out why he’s not interested…until she overhears him saying she’s too vanilla for his taste. When a heat wave sends the sexy Navy SEAL into her bakery, she finally has the opportunity to show him exactly what he’s missing…

Heat of Passion
Holly has too much on her plate to think about a serious relationship. A hot fling with a SEAL, though, is the perfect way to take the edge off. The last thing she expects is to run into her gorgeous one-night stand weeks later, and to discover that Carson wants the one thing she doesn’t: more. In the face of his methodical seduction, her resistance is crumbling…

Heat of the Storm
Will has waited fifteen years for the storm that sends Mackenzie into his arms. He’s the one man not scared of her psychic gift, and their one night of passion is enough to convince this tenacious SEAL that they are much, much more than friends. Now he just has to convince her of that…

Warning: Contains dangerously hot Navy SEALS, and heroines not afraid to take them on one-or two-at a time.
(Goodreads)

Elle Kennedy has a new fan, and guess who it is? It’s me! Surprise! I really loved reading these three stories and they only got better with each one. In only about 65 pages per story Kennedy was able to describe characters, their relationships and their lives well enough for me to actually care about them and wanting to know more about them. Kennedy managed to get a nice balance between the steamy scenes and the actual story, which was a big plus!

I really liked how the stories were all connected to each other and I’m already looking forward to reading the collection of the next three stories!