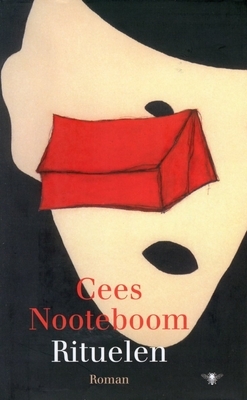 A man of independent means oddly suited to survival amid the chaos of modern life, Inni Wintrop is a committed dabbler, content to casually wander the streets of Amsterdam, follow the dips and rises of the stock exchange and commodities market, speculate in art and love, and write a newspaper horoscope column. But his inconsistencies are interrupted when he meets two men who are the epitome of order and regulation.
(Goodreads)

This was the second time I read Rituals, the first time I read it for Dutch class in high school. I didn’t understand much of it back then, and I’m still struggling to appreciate it right now. To me it isn’t really that unique, nor entertaining (I know – literature doesn’t have to be entertaining in order to be “good”. It’s just something I look for in books!). Okay, Nooteboom’s writing style was quite easy to get through and the story wasn’t super dull. At the same time, I didn’t really get to know Inni as a person and because of that it became quite a flat reading experience. It just hasn’t touched anything in me!

Then why have I given it 3.5 out of 5 stars? Because of the atmosphere Nooteboom was able to give the book and the events in it. When Inni visited Philip Taads (I don’t know if he’s also called that in English …) I got the same uncomfortable and eerie feeling as Inni did and just wanted to “get out of there, asap!”.

Now I’m writing this review I’m actually beginning to like it a little more. I was just thinking about one thing I don’t really like about (Dutch) literature, which switched something in my head when it comes to this book. I normally have quite a few problems with the randomness in literature (which, when you analyse it, isn’t random at all of course). The characters are first doing this and all of a sudden they are doing that, without any explanation whatsoever. Inni is quite impulsive at times and where I first didn’t really understand his ways, I understand now that this might be to emphasise the difference between Inni and the two Taads men. Where Inni is impulsive, both Arnold and Philip Taads are following strict rules when it comes to living their lives. So that’s that …

I might have to dive into some articles on Rituals so I can be able to appreciate it a little better!