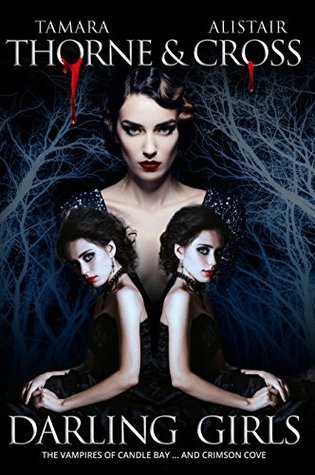 In September 2017 I read Sleep, Savannah, Sleep by Alistair Cross and I absolutely loved it. So, when I was contacted about Darling Girls I was immediately intrigued!

The vampires of Candle Bay and Crimson Cove come together for the Biting Man Festival in Eternity, California, to celebrate a centuries-old tradition that quickly turns murderous as they’re faced with old enemies, uncontrolled bloodlust, and the unpredictable antics of a self-proclaimed vampire slayer who is hellbent on destroying them all.
(Goodreads)

Tamara Thorne‘s first novel was published in 1991, and since then she has written many more, including international bestsellers Haunted, Bad Things, Moonfall, Eternity and The Sorority. A lifelong lover of ghost stories, she is currently working on several collaborations with Alistair Cross as well as an upcoming solo novel. Learn more about her at: http://tamarathorne.com

Alistair Cross grew up on horror novels and scary movies, and by the age of eight, began writing his own stories. First published in 2012, he has since co-authored The Cliffhouse Haunting and Mother with Tamara Thorne and is working on several other projects. His debut solo novel, The Crimson Corset, was an immediate bestseller. Find out more about him at: http://alistaircross.com

“Put Bram Stoker in a giant cocktail shaker, add a pinch of Laurell K. Hamilton, a shot of John Carpenter, and a healthy jigger of absinthe, and you’ll end up with Alistair Cross’s modern Gothic chiller, “The Crimson Corset” – a deliciously terrifying tale that will sink its teeth into you from page one.” – Jay Bonansinga, New York Times Bestselling author of THE WALKING DEAD: INVASION and LUCID

“A great combination of strong characters that remind me of my V.C. Andrews characters, wonderful creepy twists, and a plot that will recall Mommie Dearest in an original take that shocks and delights at the same time. This is a full blown psychological thriller worth the investment of time and money.” – Andrew Neiderman, Author of The Devil’s Advocate and the V.C. Andrews novels

Get your ecopy now!