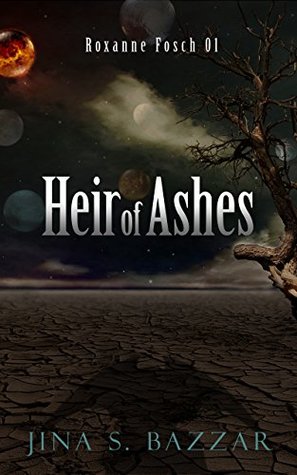 Today’s the release day of Heir of Ashes by Jina S. Bazzar. The blurb sounds really intriguing and made me really interested in reading it! Read on to find the blurb, more about the author and links to buy your own ecopy!

Roxanne Fosch had a perfectly normal life at the age of twelve. Cool, popular, pretty, smart. Her dreams of a perfect, successful and prosperous future seemed well within her grasp.
By the time she was twenty-two she had become a commodity. A fugitive. She was being hunted.
As Roxanne embarks on the dangerous quest to search for half-truths about her past, she discovers she’s not just an abnormal human, but a rarity even among her Fee peers.
She is hunted by scientists, keen to exploit her extraordinary abilities, as well as other beings far more dangerous whose plans for her she cannot fathom.
(Goodreads)

About the author, Jina S. Bazzar

Jina was born and raised in Brazil, where she had a joyful and fulfilling childhood. Soon after she graduated from high school, she was diagnosed with a chronic disease that caused gradual vision loss. She became blind at the age of twenty-three. She has since lived in the United States and Brazil, though  currently resides in the middle- east.

Like most authors, Jina had always been an avid reader, a fan of the fantastic, but was denied the joy of books when she became blind. Once she discovered screen readers, she picked up the habit of reading again, but discovered that reading was no longer enough, so she started writing her own book.

When she’s not writing in the Roxanne Fosch series or her blog, she’s writing articles for Conscious talk Magazine, where she works as a columnist.

Aside from the written word, Jina loves to spend time in the kitchen, cooking and baking for her three kids and anyone who happens by.

3 thoughts on “Heir of Ashes by Jina S. Bazzar || Spotlight”