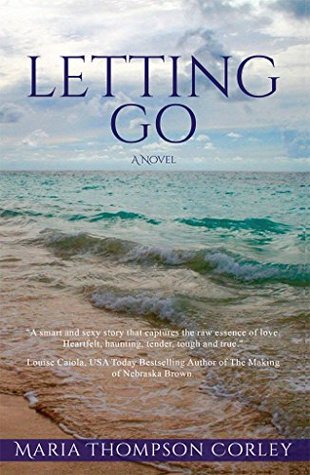 Even though she lives hundreds of miles away,
when Langston, who dreams of being a chef, meets Cecile, a Juilliard-trained pianist, he is sure that his history of being a sidekick, instead of a love interest, is finally over. Their connection is real and full of potential for a deeper bond, but the obstacles between them turn out to be greater than distance. Can these busy, complicated people be ready for each other at the same time? Does it even matter? Before they can answer these questions, each must do battle with the ultimate demon—fear.

Told in a witty combination of standard prose, letters, emails, and diary entries, LETTING GO, in the tradition of Chimamanda Ngozi Adichie’s AMERICANAH, is a long-distance love story that also examines race, religion, and the difficult choices we make following our passions. From the Great White North to the streets of New York City to the beaches of Bermuda, LETTING GO is a journey of longing, betrayal, self-discovery and hope you will never forget.

Although Letting Go is a novel of more than 500 pages, not a lot of major importance happened. That’s my humble opinion. There were not many events that were drastic for the plot. The only one that had me drop my jaw to the floor was narrated after it had already happened and Cecile, the one it was about, didn’t make it seem like a big deal.

Now that I’m talking about Cecile – I didn’t really like her character. The 500+ pages of the book were mainly filled with Cecile not knowing what’s good for her and making tons of wrong choices. All the while, her perfect match was just a phone call away, but somehow she didn’t seem to notice that at all. Where I normally get to love the characters of a book of 500+ pages, I didn’t feel any connection with Cecile. Nor Langston, although I liked him best. I think I was mainly disappointed in the lack of character development of the main characters. In my eyes they didn’t seem to grow into a better/different version of their old selves. All I thought to notice, that came close to a change in personality, was that they became kind of indifferent about life. They both weren’t happy, but they didn’t seem to want to change anything about that for a really big part of the book.

Now onto the discussion about race – it was there. But that’s all it was to me. It was discussed, but I would have liked to read about how Cecile and Langston (and others) actually felt about it all. How they grew up with it. How it affected them as a person. It was all kind of superficial to me and I think there’s so much more to it.

Despite there being a lot of passages and descriptions that weren’t really necessary to the plot, I really liked the writing style. The sentences just flowed and were beautifully written. I was kind of intimidated by the book’s length, but once I started reading I just sped through the story!