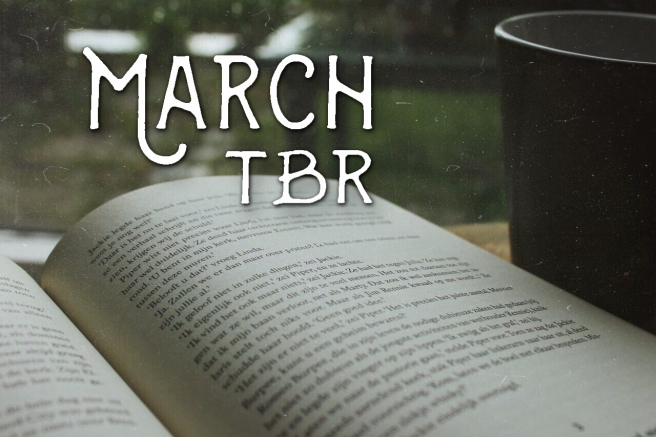 I’m still going strong on my #theunreadshelfproject guys and I’m not planning on quitting any time soon! Eventually, I will have read every single book on my shelves! So, my March TBR consists of eight books, including some bigger ones.

In a future so real and near it might be now, something happens when women go to sleep; they become shrouded in a cocoon-like gauze. If they are awakened, if the gauze wrapping their bodies is disturbed or violated, the women become feral and spectacularly violent; and while they sleep they go to another place. The men of our world are abandoned, left to their increasingly primal devices. One woman, however, the mysterious Evie, is immune to the blessing or curse of the sleeping disease. Is Evie a medical anomaly to be studied, or is she a demon who must be slain?
(Goodreads)

I only see now that I totally forgot to add Owen King as the author of Sleeping Beauties in my February TBR. Bad Romi! Well, I hope to finally read this big monster of a book in March. I have heard mixed thoughts on it, so I’m very curious about my own!

Even though she lives hundreds of miles away, when Langston, who dreams of being a chef, meets Cecile, a Juilliard-trained pianist, he is sure that his history of being a sidekick, instead of a love interest, is finally over. Their connection is real and full of potential for a deeper bond, but the obstacles between them turn out to be greater than distance. Can these busy, complicated people be ready for each other at the same time? Does it even matter? Before they can answer these questions, each must do battle with the ultimate demon – fear.

Told in a witty combination of standard prose, letters, emails, and diary entries, LETTING GO is a long-distance love story that also examines race, religion, and the difficult choices we make following our passions. From the Great White North to the streets of New York City to the beaches of Bermuda, LETTING GO is a journey of longing, betrayal, self-discovery and hope you will never forget.
(Goodreads)

This is another review book that’s been on my TBR for way too long. It really sounds like a nice romance! I kindly received an ecopy of this book in exchange for an honest review.

This sexy cowboy is out of his element. He doesn’t want commitment, but Jodie Ellison is a force of nature who can’t be ignored.

Jodie Ellison loves wild parties, chaotic fun, and spontaneity in her hometown of Ocean City, Maryland. With her writing career and waitressing job not quite paying the bills, Jodie desperately needs a new roommate and finds herself in a nightmarish situation when her roomie turns out to be a disastrous choice.

The wild and unruly Levi Creed is a little bit rebel and a whole lot of sexy. When he moves in next door to Jodie, things get a bit tumultuous thanks to a squawking parrot and a dangerous fire pit. It seems like Levi’s adorable Texan drawl and perfect body can’t possibly win over Jodie… or can they?

An undeniable chemistry simmers between the unlikely pair. The beach babe and the sexy cowboy soon find themselves asking: Can they tame their wild hearts and commit to the blossoming romance between them?
(Goodreads)

At the start of 2018 I read All of You by the same author and she was so kind to send me an ARC of Wild Hearts. This is the second book in the series “Lines in the Sand” of which Inked Hearts is the first book. If I’m lucky enough to finish my TBR before the end of March, I hope to squeeze in reading Inked Hearts as well!

Tales from a Talking Board by Ross E. Lockhart and others

Can we speak with the spirits of the dead? Is it possible to know the future? Are our dreams harbingers of things to come? Do auspicious omens and cautionary portents effect our lives?

Edited by Ross E. Lockhart, Tales from a Talking Board examines these questions–and more–with tales of auguries, divination, and fortune telling, through devices like Ouija boards, tarot cards, and stranger things.

This book was included in December’s The Nocturnal Reader’s Box and the cover looks really awesome! It’s a collection of short stories and I’m really looking forward to reading them!

A Caribbean Mystery by Agatha Christie

As Jane Marple sat basking in the tropical sunshine she felt mildly discontented with life. True, the warmth eased her rheumatism, but here in paradise nothing ever happened. Then a question was put to her by a stranger: ‘Would you like to see a picture of a murderer?’ Before she has a chance to answer, the man vanishes, only to be found dead the next day. The mysteries abound: Where is the picture? Why is the hotelier prone to nightmares? Why doesn’t the most talked-about guest, a reclusive millionaire, ever leave his room? And why is Miss Marple herself fearful for her life?
(Goodreads)

I picked this book out of my TBR jar and after loving Murder at the Vicarage I’m ready to dive into another story starring Miss Marple! And doesn’t the blurb just sound absolutely thrilling?!

The Rexwood Murders by Barron Jones

In the modern town of Rexwood, Georgia, five friends aren’t your average teenagers. They each have dark secrets that are eager to be released from the closets of their minds. On the Halloween night, Brandon Jones, Denise and Selena Calloway, Courtney Brown, and Joshua Boroughs spend the night in an abandoned mansion with their neighborhood friends. But almost as soon as they get comfortable, their friends turn up missing. When they stumble on an evil secret between the old occupants and their parents, they are roped into a cat and mouse game with a psychopath and must find a way to escape the mansion alive. And even if they escape, how will they cope with the events that go down in the mansion?

At every twist and turn, The Rexwood Murders is sure to take you on a wild ride.
(Goodreads)

This book was kindly sent to me for review by the author! Unfortunately, it doesn’t really have a high average rating on Goodreads, but I’m still curious and hoping I might actually find it a good one.

Is love enough to repair the pieces of a shattered life?

This is the question plaguing Courtney Cook’s mind as she packs what feels like her whole existence into a 20ft moving van. When she encountered Matt for the first time in a coffee shop ten years prior, she was immediately transfixed. Dark, adventurous and wildly untamed, Matt was everything Courtney didn’t know she wanted. One night of uninhibited abandon is all it took for her to be completely enthralled by the boy without limits. Now with two children, a sky-high mortgage and a marriage crippled by addiction, Courtney finds her world is riddled with cracks that no amount of love can repair.

Powerful and provoking with humor woven throughout the raw sting of heartbreak, Like Broken China offers an honest take on the decisions two people make and the aftermath that can destroy an entire decade because of them.
(Goodreads)

Yet another review copy that has been on my TBR for way too long. Because of a creepy dream I recently had I think it’s about time I read some more love stories instead of bloody horrors! So, I’m glad I picked this one out of my TBR jar!

A celebrated writer’s irresistible, candid, and eloquent account of her pursuit of worldly pleasure, spiritual devotion, and what she really wanted out of life.

Around the time Elizabeth Gilbert turned thirty, she went through an early-onslaught midlife crisis. She had everything an educated, ambitious American woman was supposed to want—a husband, a house, a successful career. But instead of feeling happy and fulfilled, she was consumed with panic, grief, and confusion. She went through a divorce, a crushing depression, another failed love, and the eradication of everything she ever thought she was supposed to be.

To recover from all this, Gilbert took a radical step. In order to give herself the time and space to find out who she really was and what she really wanted, she got rid of her belongings, quit her job, and undertook a yearlong journey around the world—all alone. Eat, Pray, Love is the absorbing chronicle of that year. Her aim was to visit three places where she could examine one aspect of her own nature set against the backdrop of a culture that has traditionally done that one thing very well. In Rome, she studied the art of pleasure, learning to speak Italian and gaining the twenty-three happiest pounds of her life. India was for the art of devotion, and with the help of a native guru and a surprisingly wise cowboy from Texas, she embarked on four uninterrupted months of spiritual exploration. In Bali, she studied the art of balance between worldly enjoyment and divine transcendence. She became the pupil of an elderly medicine man and also fell in love the best way—unexpectedly.

An intensely articulate and moving memoir of self-discovery, Eat, Pray, Love is about what can happen when you claim responsibility for your own contentment and stop trying to live in imitation of society’s ideals. It is certain to touch anyone who has ever woken up to the unrelenting need for change.
(Goodreads)

This is a book I spontaneously bought at a bookmarket, mainly because it’s such a popular book/film! I believe my mom’s currently loving it, so I’m looking forward to sharing my thoughts with her!

What are some books on your March TBR?