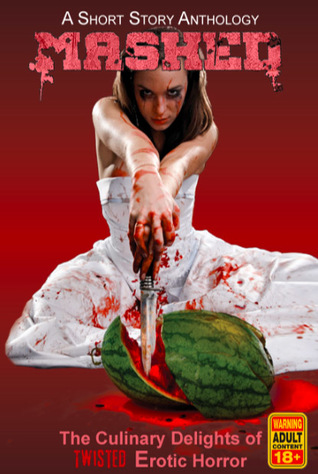 It’s like Scary movie meets 50 shades on The Food Network!

MASHED is an anthology of 17 stories culled from over 200 submissions and includes authors from around the world.

Each story is a unique blend of horror, humor, food and sex, resulting in tales that will leave you both scared and slightly turned on, while laughing out loud and contemplating whether or not you should have your next meal.

The 17 Sensually Sinister Stories include –

A Woman’s Corn – Two secret lovers with more secrets then either of them knew, brings about a special witches brew while the devil stews.
By J. Donnait

Charlies Chunky Munching Meat – A tale of obsession over a certain pink meat, gone too far.
By Stephen McQuiggan

Halloween Nosh – Two old-world vampires celebrating their love during the holidays with a special feast in the dungeon.
By Brandon Ketchum

Biscuit: A Love Story – A baker’s dreams destroyed by a homeless man with unnatural hungers, leads to super-natural revenge.
By Grivante

Burnt Scrambled Eggs – What happens when your succubus lover stays over for breakfast?
By Devon Widmer

The Disagreeable Dinner – Ever eaten a bad meal? Not like this one. Join us for this strange and hilarious case of food poisoning
By Mark Daponte

The Henry Problem – Fruit as an aphrodisiac, exorcisms for dummies? All that and more!
By John Grey

The Wrath of the Buttery Bastard Taters – GMO’s are out of hand. A couples romantic dinner turns into a nightmare when their frankenfood decides to eat them instead.
By Alex Colvin

Sauce – When cooking lessons lead to a new fetish, narcissistic Bart, takes self-satisfaction to a new level.
By Steven Carr

The Care and Feeding of your Personal Demon – Be careful what you wish for. Sometimes, asking for a little help from down below can come with a lifetime of demented and hilarious torment.
By Maxine Kollar

P.A.C.D. The Kitchen of Tomorrow, Today! – Advancements in technology are often quickly perverted for sexual experimentation. Find out what happens when a couple’s cooling romance heats back up with a new kitchen appliance.
By R.A. Goli

Toilet Manners – Marital impropriety leads to the strangest meal of a man’s life after a visit to a glory hole inside a fancy french restaurant.
By Eddie Generous

The Stray – Is the story of a man’s lifelong dedication to helping strays. But, what happens when one gets a little upset when he announces he is moving away.
By Calypso Kane

The Old Man in the Suit – Voodoo and baked goods outside a lesbian bar during Mardi Gras.
By Nicholas Paschall

I had absolutely no idea what to expect when this short story collection was sent to me for review. I didn’t know how the authors would combine horror, food and sex in seventeen different stories. Somehow … they did it – be it that the stories were super weird and not really scary or thrilling at all. Imagine a biscuit so soft and sweetly scented that it gets gangraped by a group of bums. Yep, weird.

Nevertheless, the writing of each story was quite good! Besides the extreme weirdness of most of them, all of them actually made sense when it comes to chronology!

My favourites of the stories were:
– “Sugar” by Darla Dimelle
– “The Wrath of the Buttery Bastard Taters” by Alex Colvin
– “P.A.C.D. The Kitchen of Tomorrow, Today!” by R.A. Goli
– “Arabica” by Cobalt Jade

4 thoughts on “MASHED by Grivante and others || Review”