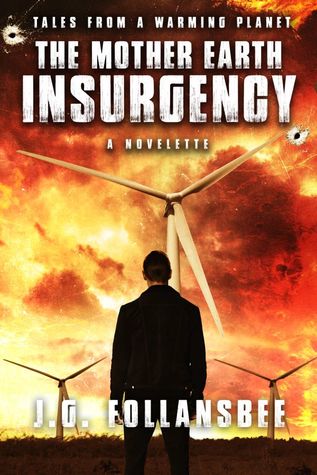 What if you learned a terrorist might destroy a structure 20 kilometers tall, murdering thousands of people inside? Nick Sorrows is an undercover agent with the Bureau of Environmental Security. He is ordered to discover the plans of Jon Janicks and The Mother Earth Insurgency, which is determined to stop the hijacking of clean energy by greedy corporations. After a riot in Seattle, and an attack on a wind power farm in California, Sorrows learns about the MEI’s most audacious plan yet. Will Agent Sorrows stop the terrorist Janicks from killing thousands?

Winner of an Honorable Mention in the 2017 Writers of the Future science fiction contest, the Mother Earth Insurgency: A Novelette is the first thrilling story in the series Tales From A Warming Planet, which is set in a near-future world ravaged by climate change.
(Goodreads)

Although this is the first book in the series “Tales of a Warming Planet” by J.G. Follansbee, it was the second one I read. I read Carbon Run (click to read my review) first and thought it was okay. However, I just loved reading this short story about Nick the undercover BES agent. Where the BES are depicted as the bad guy in Carbon Run, they are actually the good guy in this story. But, to quote my favourite man Dr. Phil: “No matter how flat you make a pancake, it’s still got two sides” 😉 So, saying that the BES are the good guys in The Mother Earth Insurgency and the members of the MEI the bad ones is not that easy and actually wrong. They both got good arguments.

You get thrown right in the middle of the action and where I normally love that, in The Mother Earth Insurgency it came over as kind of messy. I’m not familiar enough with the futuristic world they live in, so I prefer a little background before I get thrown right into the middle of it. Because of this I didn’t really know who was who and what the heck was happening! Luckily I found out soon enough and could enjoy the story. And enjoying it I did!

It had me on the edge of my seat the entire short story long! Follansbee did a great job on building a future world after it gets ravaged by climate change. A lot happened in only 65 pages and it definitely seemed like reading a full novel of 300 pages!

* I received an ecopy of this book in exchange for an honest review, thank you! *

2 thoughts on “The Mother Earth Insurgency by J.G. Follansbee || Review”