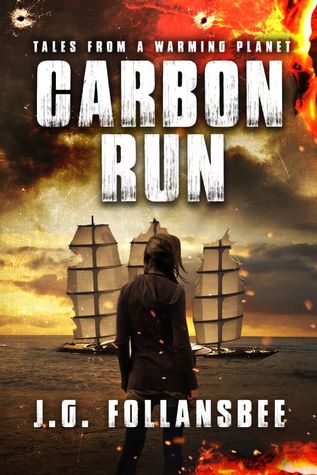 What if your father had to run for his life? Carbon Run is an exciting thriller set in a dystopian world ravaged by climate change. Fossil fuels are banned, pirates smuggle oil, and governments erase citizens’ identities. Anne Penn dreamed of saving an endangered species of birds. When a fire destroys the birds’ last home, her beloved father Bill is accused of starting the blaze. Fanatic officer Janine Kilel comes to arrest Anne’s father, but Bill escapes, because in the 22nd century, destroying a species means execution. How will Anne find her father in a Russian city where the difference between good and evil is as murky as the choking smog?
(Goodreads)

Okay, I’m really having a hard time rating this book and I’ll try to explain why.

When I was offered the opportunity to review this story about global warming, I was really excited. Growing up in a very conscious little town I learnt about protecting and loving the Earth at a very young age, so a dystopian on what a possible outcome of the climate change could bring really intrigued me! Nevertheless, I know myself for not being able to enjoy futuristic books as much as contemporary ones, mostly because it takes place in a world unknown to me. Most times I just miss a connection to the characters, because they live (have to live) their lives so differently than I do. (Maybe I’m just scared of the future, who knows?) This was also the case with Carbon Run. I didn’t particularly like any of the characters and the ones I kind of liked were just too ‘flat’ for me to care about.

Although I enjoyed the book while I was reading it, I didn’t necessarily feel the urge to pick it up when I wasn’t reading. Nearing the end of the book I even found myself getting less and less interested in the outcome, easily distracted and looking forward to my next read. This lead to me merely scanning the text for the important parts and just reading over the rest.

All of this is just me and my love/hate relationship with dystopians. It doesn’t really say anything about the quality of Follansbee’s writing style. Although I didn’t feel a connection, I do appreciate the world Follansbee has built. It takes imagination and talent to depict a world that’s just … right. I couldn’t find anything super unrealistic in the future world of Carbon Run: from a disaster that increased climate change and everything destructive to almost the max, to the “minds eye”. I can really imagine people living in the 22nd century with built-in “computers” so they can communicate with others and even order in a restaurant without the need of paper or smartphone. It’d all take place in your head!

So yes, because I need a connection to the characters of a story for me to really enjoy a book, I’m giving this book ‘only’ 2.75/5 stars.

Follansbee was kind enough to also send me the first book in the series, The Mother Earth Insurgency (a novelette) and I hope to get to that one soon, because Carbon Run got me really curious about our possible future world!