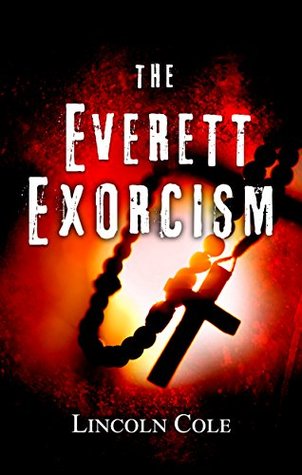 Something strange is happening in the city of Everett, Washington and Father Niccolo Paladina is tasked with investigating possible demonic activity. Nothing is as it seems, however, and things quickly begin spiraling out of his control.

When his path crosses with that of an old rival, they discover that things are worse in Everett than either of them could ever have imagined. As his world collapses around him, Niccolo will be left with one terrible question: what is my faith worth?
(Goodreads)

This was my first ever occult horror story, so I don’t have anything to compare The Everett Exorcism with, but overall I really liked reading this book!
*This review may contain some minor spoilers, but it won’t actually spoil anything huge!*

The story starts with a preface which throws you right into the middle of the story. Literally! The following half of the book takes place in the two days before the event in the preface. So, you already know what’s going to happen, but … you don’t know what the outcome of that event will be!

The start of the story was also the bit that confused me a little. I was trying to get to know all the characters, who’s who?, but that became rather difficult because there are two priests: Father Jackson Reynolds and Father Niccolo Paladina. Both were referred to with either their first name (Niccolo/Jackson) or “father Paladina/Reynolds”, and this was switched up some times. This made it seem like there were four different main characters, instead of only two! But eventually I got it into my head, and I could enjoy the story.

Another thing that bugged me (only a little!) was the rather elaborated history of another main character Arthur Vangeest. I think this could’ve been shortened, because now it took up a lot of pages. It kind of got me out of the story that was supposed to be about creepy and horrific demons. Or that was what I thought when I started reading that part of the story … This background story had everything to do with why Arthur came to Everett, so in the end I got why it was so detailed. And besides, this book is the first one in a series, so I actually like to get to know the characters well!

What I love most about the story is that Father Paladina and Arthur Vangeest seem to make a most impossible couple: one being a priest from the Vatican and the other being a demon hunter. But nothing is less true. They both bring in their own strength. Where Father Paladina brings in his faith, Arthur bings in his ability to kick some demon ass!

All in all: I’m happy with my first experience with occult horror and exorcism stories! Although I’d liked to see some more of what the possessed people go through and what they caused in the little village of Everett, luckily, this didn’t take anything away from the quality of the story. I hope I get to read more about Father Paladina, Father Reynolds and Arthur in the future, because there were still some open ends that need some filling in!

One thought on “The Everett Exorcism by Lincoln Cole || Review”