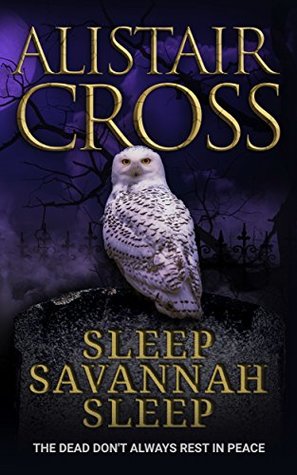 Jason Crandall, recently widowed, is left to raise his young daughter and rebellious teenage son on his own – and the old Victorian in Shadow Springs seems like the perfect place for them to start over. But the cracks in Jason’s new world begin to show when he meets Savannah Sturgess, a beautiful socialite who has half the men in town dancing on tangled strings.

When she goes missing, secrets begin to surface, and Jason becomes ensnared in a dangerous web that leads to murder – and he becomes a likely suspect. But who has the answers that will prove his innocence? The jealous husband who’s hell-bent on destroying him? The local sheriff with an incriminating secret? The blind old woman in the house next door who seems to watch him from the windows? Or perhaps the answers lie in the haunting visions and dreams that have recently begun to consume him.

Or maybe, Savannah herself is trying to tell him that things aren’t always as they seem – and that sometimes, the dead don’t rest in peace.
(Goodreads)

You may already have read a little about this book in yesterday’s post on 10 creepy books to read in October, and you may already have noticed that I really liked reading it! It was a perfect paranormal/horror read and it had me on the edge of my seat throughout the entire book.

The story starts off as your average horror story: A man and his children move into a victorian house, located in a small village, after recently losing his wife and their mother. Most people would be like “ugh, cliche”, but I actually love cliche horror stories! Nevertheless, this absolutely didn’t take anything away from the quality of the story in my humble opinion. Not at all! Where I can normally guess what the final plot twist will be halfway through the book, I thought I had the same with this one. But well … I couldn’t be more wrong. Every time I thought “this is how it’ll end”, I was wrong. When the final plot twist finally arrived, I didn’t see it coming until the main characters also did. This really got me hooked until the very last page!

The main character, Jason, goes through a huge personality change. And it didn’t just happen like that, but more gradually throughout the entire story. Where he is kind of a coward at the start of the book, he ends up kicking some ass at the ending. Talking about the ending, what I already kind of did: it was SO good. Let’s just say that I hope I won’t find myself in Jason’s situation somewhere in my own future.

One thing that kind of bugged me at the start, was the sexist focus on the female body when introducing a new female character … But, thinking back on the story, I guess that’s more about showing the difference between lust and love, which are perfectly human feelings. Thinking back again, my main thought is that the whole story was just complete: everything fitted and made sense, which was a huge plus to me. When everything was being explained at the end, I read the last few pages with my jaw on the floor.

Like I said yesterday: this book is a perfect read to read in the spooky month of October!

Today’s the release day of Sleep, Savannah, Sleep, so buy your own copy NOW!