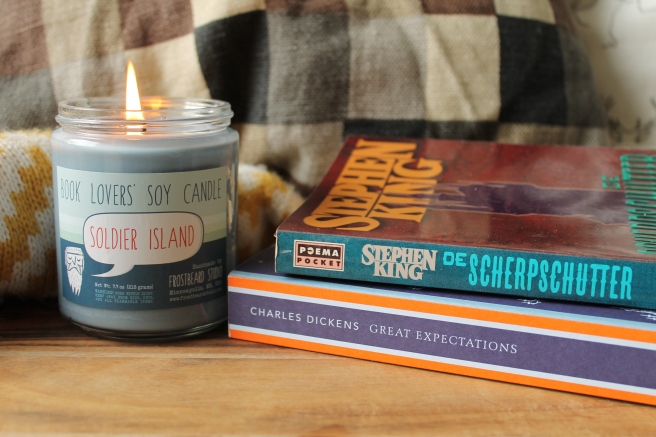 The first month of the year is already over, which means that it’s February and time for me to share my monthly TBR with you!

I won’t go into detail about most of the books I have to read for uni, since that’s not really that interesting right?

The Gunslinger by Stephen King

In The Gunslinger (originally published in 1982), King introduces his most enigmatic hero, Roland Deschain of Gilead, the Last Gunslinger. He is a haunting, solitary figure at first, on a mysterious quest through a desolate world that eerily mirrors our own. Pursuing the man in black, an evil being who can bring the dead back to life, Roland is a good man who seems to leave nothing but death in his wake.
(Goodreads)

I started reading this a couple of nights ago. Mostly because thinking of the coming trimester was already making me quite nervous. I hadn’t really an idea of what to expect, but what I’ve already read is great! And beside that it’s only 200 pages long, so I think I will finish it before classes really start again!

Great Expectations, Dickens’ funny, frightening and tender portrayal of the orphan Pip’s journey of self-discovery, is one of his best-loved works. Showing how a young man’s life is transformed by a mysterious series of events – an encounter with an escaped prisoner; a visit to a black-hearted old woman and a beautiful girl; a fortune from a secret donor – Dickens’ late novel is a masterpiece of psychological and moral truth, and Pip among his greatest creations.
(Goodreads)

This is a book I have to read for uni, but also a book that has been on my TBR for a while. I’m now 100+ pages in and it’s getting better and better and only 400+ pages to go!

“The blue water I sank through was angelic, quiet, peaceful…”

Whitney is a vivacious, highly spirited 17-year-old girl. Her motto, “Live life to the fullest” is derailed when the young man, who’s captured her attention, turns out to be the son of a drug tycoon- the same that provided the drugs that killed her brother. Whitney believes she simply need to heal from her first heartache, not knowing she is a part of a devious trade, one against human rights, and she has been… since the day age was born.

Blue Waters is the first Novella in a Tainted Waters, and begins a story of deception, corruption, self-discovery, and love with all that it demands you sacrifice…

“There was a beauty in dying that day…”
(Goodreads)

I received an ARC of this book to read and review on the 16th of February!

Behind the Door by A. Gavazzoni

When Lara dies at the hands of a Manhattan lawyer during a sex game, his defense attorney, Carl, hires Simone, a psychiatrist, professor and author of books on sexual behavior to help him buttress his argument that Lara’s death was accidental. To help his defense, Carl’s client has written a detailed account of his steamy, year-long relationship with Lara. Carl gives the text to Simone for analysis.

While evaluating the presumed killer’s writing Simone continues to receive psychiatric patients with sexual disorders and unusual fantasies, and to research strange sexual behavior for her next book. Meanwhile, Simone’s clinical partner, friend and research colleague, Edward, is working with the police to capture a serial killer who is torturing and killing women.

From hot and unusual sex and interesting psychiatric patients, to the swing houses of New York and Paris, this fast-paced page-turner is a blend of mystery, suspense, humor, romance and erotica.
(Goodreads)

I received an ARC of this book to read and review on the 23rd of February!

The candle in the photo is from Frostbeard Studio (webshop || Etsy) and is called Soldier Island (the limited edition of February, so get your hands on it!). It’s inspired by Agatha Christie’s And Then There Were None and has the scent of the ocean, driftwood and a hint of gunpowder. (IT SMELLS AMAZING)

Hello June 🌞✨ . I’m actually looking forward to the Summer, what has this quarantine done to me? 👀 . Here are the books that I plan to read in the month of June: • Read the remaining stories of If it Bleeds by Stephen King* @boekerij • OMFG by Emily James* • In my Father’s Garden (Knielen op een bed violen) by Jan Siebelink • The Gone World by Tom Sweterlitsch • Dark Celebrations by @calvindemmer* (this time for real 🙈) • Magic by Mike Russell* . . What book are you looking forward to reading in June? 📚 . . * I received review-copies of these books, authors and publishers are tagged where possible. Thank you! 💛 . . . . #bookstagram #bookworm #booklover #junetbr #hellojune #toberead #wanttoread #tbr #summertbr #bibliophile #jansiebelink #dutchliterature #horrorfiction #stephenking #constantreader
May wrap up! 📚 . Again, it felt like I haven’t read that much. Yet I have read 6.5 books. Not bad at all, also when you keep in mind that most were about 400-500 pages thick 🙋🏻‍♂️ . This month I’ve read: • Strange Medicine by Mike Russell* • Losing you by Nicci French • The remaining stories by Richard Bachman (Stephen King) • Kintu by Jennifer Nansubuga Makumbi* • De patiënt van Sebastian Fitzek • Faking it as the Maid by Emily James* • Half of If it Bleeds by Stephen King* . . I’m currently LOVING King’s new book and for all who haven’t yet read The Outsider and the Bill Hodges trilogy: read those first! There are some huge spoilers of those stories in the third story of If it Bleeds 🤭 . . * I received review-copies of these books - authors and publishers are tagged where possible! Thank you 💛 . . . . #bookstagram #boekenlezen #stephenking #wrapup #maywrapup #reading #constantreader #ugandeseliterature #jennifernansubugamakumbi #emilyjames #sebastianfitzek
So far If it Bleeds has everything I look for in a King 💛 . . Dutch translation of If it Bleeds is #gifted by @boekerij! . . . . #boekerij #boekstagram #bookstagrammer #coffeelover #stephenkingbooks #constantreader #horrorlover #shortstorycollection #ifitbleeds #openbook #currentlyreading #amreading
Yesterday evening I started If it Bleeds by Stephen King (#gifted by @boekerij). I just finished the first story and it really felt like a typical King-story. I loved it! 💛 . De Nederlandse vertaling, Als het bloedt, ligt vanaf vandaag in de (online) boekhandel 🙋🏻‍♂️ . . . . #bookstagram #stephenking #boekerij #alshetbloedt #constantreader #ifitbleeds #horrorfiction #thrillerbooks #shortstories #kingofhorror #cozyreading #readingnook
Today I’m going to finish Kintu. Although I loved it to bits, it’s taken me quite long to read it. There are just too many distractions in this house 🥺 . Thank you so much @uitgeverijcossee for sending me a review-copy of Kintu! 💛 . . . . . #bookstagram #bookworm #boekenliefde #kintu #jennifernansubugamakumbi #ugandanliterature #coffeetime #mondaycoffee #gifted #readingnook #reviewcopy
It’s finally here 😍 Thank you so much @boekerij for the review-copy of If It Bleeds by the King! . I’m currently reading Kintu by Jennifer Nansubuga Makumbi (#gifted by @uitgeverijcossee), but I’m going to start If It Bleeds as soon as I finish Kintu! 👏🏼 . . . . #bookstagram #reviewcopy #ifitbleeds #stephenking #kingofhorror #shortstorycollection #constantreader #newbook #shelfie #saturdayshelfie #bookhaul #uitgeverijcossee #meulenhoffboekerij #boekerij